Yesterday was  St. Patty’s Day!  Instead of celebrating the holiday by getting drunk on cheap tasting green-dyed beer, your guide to the wonderful world of sour beers decided to have a nice meal out with one of my good friends at a local craft brewery.  While most of central Pennsylvania has not yet developed the beer culture that places like San Diego, Portland, or Philadelphia have embraced, things are beginning to head in the right direction for craft beer and sour beer enthusiasts.  There are a few new craft breweries which have sprung up in our area and a few which have been well established for some time now.  Although somewhat spread out, Bullfrog Brewery in Williamsport, Sellinsgrove Brewing in Sellinsgrove, and Tröegs of Hershey all produce excellent local beer including some special release sour beers.  More recently established and also very close to my home is Pizza Boy Brewing Company of Enola, PA.  In addition to a nice menu of Italian food, Pizza Boy offers a very wide variety of traditional and experimental beer styles and, to my delight, maintains a few sour beer offerings which tend to be available year round. 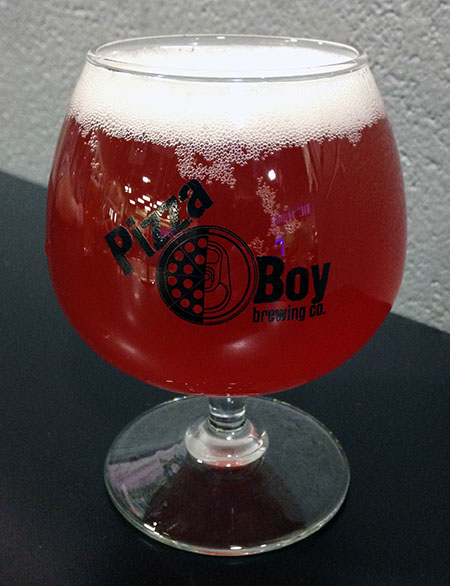 Owner Al Kominski started the brewery several years ago as an expansion to his restaurant which, at the time, already offered a number of craft beers on draft to pair with their dining menu.  In short order, the brewery & restaurant had become too successful for its current location to support and therefore moved to a newly built facility nearby.  At this time Al hired a new brewer, Terry Hawbaker, who previously worked for Bullfrog of Williamsport and who is the man responsible for introducing sour beers into the regular lineup of Pizza Boy offerings. Last night, in addition to a nice Pizza Boy vanilla porter and an excellent Belgian import called Zinnebir by Brasserie De la Senne, I had the pleasure of drinking a very tasty sour beer called Pizza Boy Raspberry Sour Ale.

This session/table beer clocks in at a refreshingly low 3% ABV, which is a great beer to have on the lineup for any night where you’d like to drink socially and still drive responsibly.  I had the beer on draft and it was well presented with a half-inch of white head in a Belgian tulip glass.  The beer is an orangish-pink color and is slightly hazy.  The aroma is a mixture of light lactic acid and moderate raspberries. 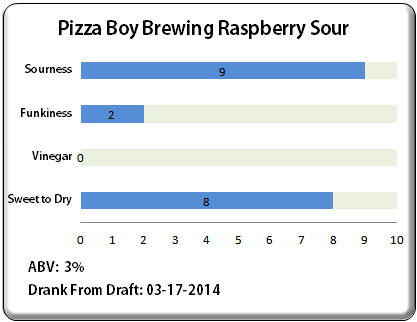 This is an assertively sour, mouth puckering beer.  I had this beer shortly after drinking a Cantillon Rosé de Gambrinus at home and this was noticeably more sour.  After the first few sips though my palate grew accustomed to this high level of souring and was able to start picking out the moderate raspberry and mild Brettanomyces flavors in the beer.  The sour profile is a relatively equal blend of sharp lactic acid and softer malic acid from the fruit.  There are no acetic (vinegar) flavors present.  The fruit flavors taste natural and are clearly identifiable as raspberry.  Both the flavors of the fresh raspberry juice and also some bitterness from the tannins of the seeds and skins are present and pleasant tasting.

The Brettanomyces is very mild, providing some subtle bready and yeasty notes but is primarily identifiable in the mouthfeel and dryness of the beer.  The beer is bone dry, there is no residual sugar or sweetness left in the flavor profile.  The beer has a moderate to high level of carbonation.  Lacking any significant malt backbone, the carbonic acid (present in all carbonated beverages) provides a noticeable addition to the flavor profile on its own.  The mouthfeel of the beer would be quite watery and thin without this carbonation, but with the higher levels present the body does feel fuller.

Overall, this is a well made sour beer.  While it is sharply puckering at first, after a few more sips the low ABV, nice fresh raspberry character, and refreshingly dry finish make this sour ale a very easy drinking session beer.  I could easily down a growler of this in the hot summer sun while poolside or playing yard games.  If you are a fan of sours this beer alone is worth making a trip to Pizza Boy Brewing Company.  I am certainly happy to have a local brewery producing quality sour beers like this. 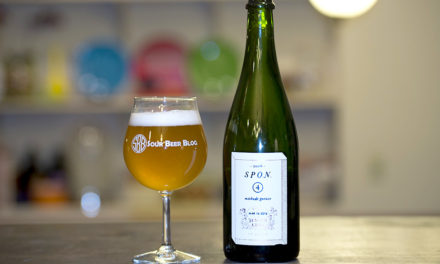 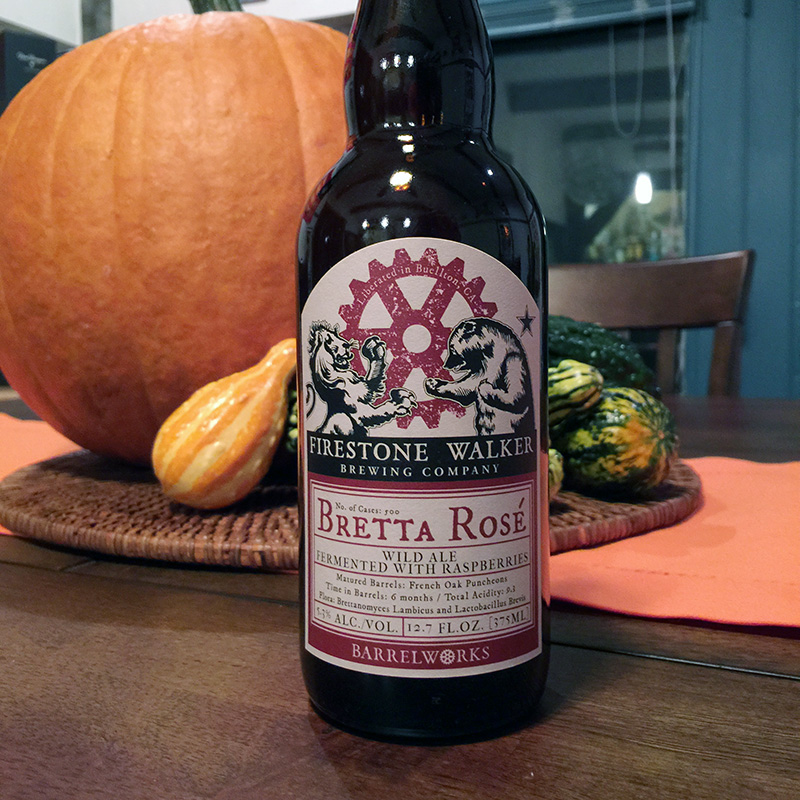